the monster was challenged 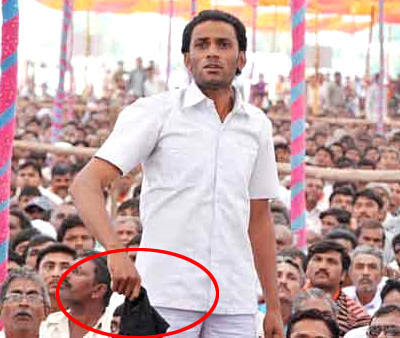 On 6 December, 2012, Gujarat’s fascist chief monster was challenged in a big gathering, when he was addressing an election rally at Budhel village in Bhavnagar. His name is Manhar Rathod, in his thirties, but fired by a burning desire, stood up with black cloth, interrupted Mr. Modi and shouted, “jawab apo, jawab apo” (give the answer) on issue on Thangadh killings. Modi was stunned by his gesture and could not speak for a moment but, later, in his own cheap, despicable style ridiculed him saying he was agent of Congress. Manhar was arrested by police and after routine questions he was released. The news of defiant youth spread in entire state and his mobile number was messaged through SMS and everybody congratulated him.

I talked with Manhar, who told me that he was present during last rites of three youths in Thangadh. "I am a staunch Dalit", he added.
Posted by rajesh solanki (raju) at 4:40 PM