year 1989. Sambarda - a village and native place of the then central minister Bhairavdan Gadhvi witnessed unbearable atrocities on dalits. The perpretators of crime were kith and kin of Congress minister. The dalits left village and camped in collector office of district Palanpur. And, started a historical struggle so popular and intense that it affected electoral outcomes which saw end of congress rule in Gujarat. Sambarda is in North Gujarat.

Same year witnessed barbaric murder of one Bhikhabhai Rudabhai Sagathia in Toda village of Taluka Kalavad (D. Jamnagar). Bhikhabhai's sister was harrased by Caste Hindus of village. When Bhikhabhai scolded those googns. They burnt Bhikhabhai alive by hanging him upside down under a neem tree by torching fire underneath. This brutal murder shaken Dalits who, then decided to protest. A rally was organised in Ahmedabad. 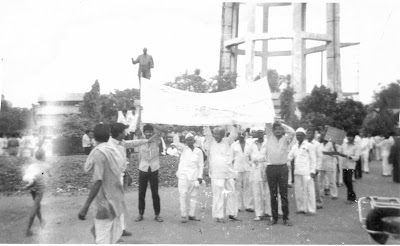 Rally starts from Dr. Babasaheb Ambedkar's statue, Sarangpur, Ahmedabad. Vasant and Rajendra, activists of Jati Nirmulan Samity were carrying the banner along with Maganbhai Contractor (centre) with Rudabhai (in traditional dress of Saurashtra). 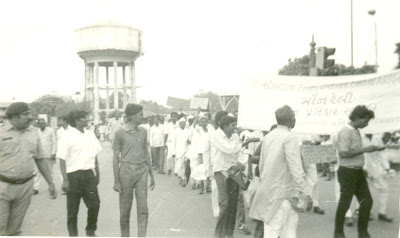 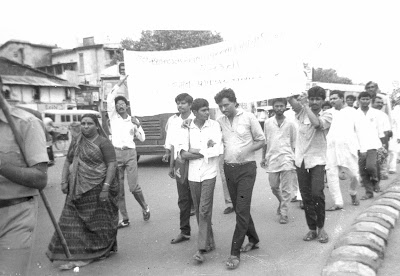 Those were the days when BJP was party in opposition. Its dalit leaders were non-entity among dalits. Fakirbhai Vaghela (now, Social Welfare minister) and Ratilal Varma (Ex MP) humbly requested organisers of rally to join the protest. They said, "we are not coming as BJP workers, but as a dalit fellow, please allow us to join the rally." After, a heated disscussion they were allowed to join the rally. 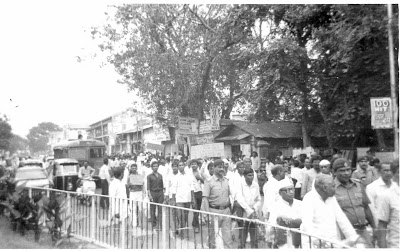 ...... when funding agencies had not plagued dalit movement. Activists were not paid, they fed on passions. 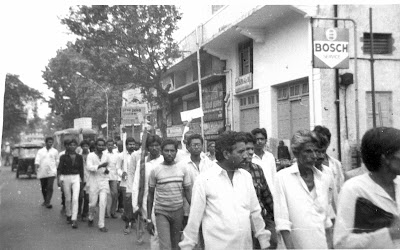 Dalit youths used to join such rallies with sticks, rods and pipes. Nobody dared to come in their way. 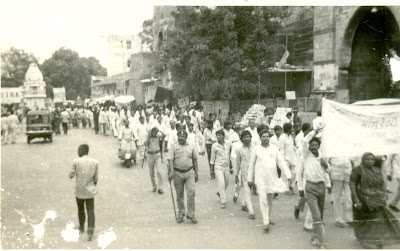 Dhansukh Kantharia, the young man who died in his youthful days and who was  also one of the actors of street play Bamanvad ni Barakhadi is seen carrying the banner. Behind him are walking Fakirbhais of yesteryear.